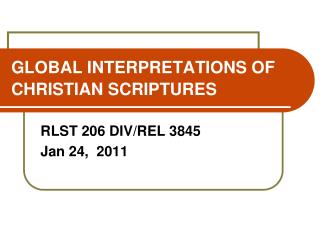 GLOBAL INTERPRETATIONS OF CHRISTIAN SCRIPTURES. RLST 206 DIV/REL 3845 Jan 24, 2011. Today. a) 3:10 Contemporary Models for the Interpretation of Scriptures: “ INCULTURATION HERMENEUTICS” b) 4:00 Presentation of Readings of Scripture in Nigeria: “Creation” in the Christian Scriptures - . jesus christ is the word of god existing with god from the beginning…

Scriptures - . are. profitable. “all scripture is given by inspiration of god, and is profitable for doctrine, for

Interpretations of I - . does environmental policy have any foundations?. some candidates. vulnerability utilitarianism