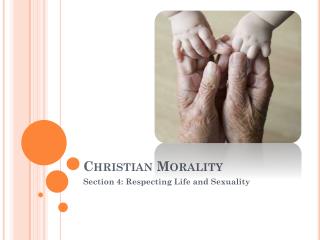 Christian Morality. Section 4: Respecting Life and Sexuality . Part 1: The Fifth Commandment: Respecting Life. The gift of life is God’s greatest gift to us. All humans are created in the image and likeness of God, so to e nd one’s life is a sin. Christian Morality - . god reveals himself. god the father jesus the church (through the power of the holy spirit).

Christian Morality - . what is morality?. morality has to do with the way we live our life. it helps us decide what

Christian Morality Session 2- Natural Law - . pete byrne ccrs bexhill. what separates you from an animal?. “to

Morality - Morals/ethics. pertaining to the consensus of manners and customs within a social group, or to an inclination

Morality - . “we all think that morality is important, but we can't agree on what is moral.”*. to conservative

Morality - . anthony sieckmann. morality. morality - is the differentiation of intentions, decisions, and  actions

Morality - Chapter 11. morality . basis for a choice among significant options right vs. wrong among the first words

MORALITY - . morality has to do with the way we live our lives. it is about what is right and wrong, good and bad.