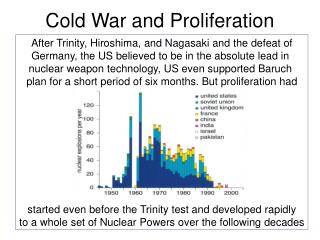 Cold War and Proliferation . After Trinity, Hiroshima, and Nagasaki and the defeat of Germany, the US believed to be in the absolute lead in nuclear weapon technology, US even supported Baruch plan for a short period of six months. But proliferation had Cold War and Proliferation - . after trinity, hiroshima, and nagasaki and the defeat of germany, the us believed to be in