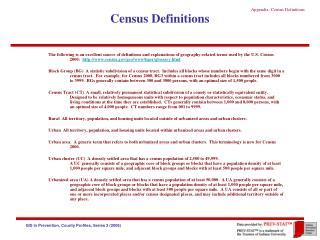 Census Definitions. The following is an excellent source of definitions and explanations of geography-related terms used by the U.S. Census 2000: http://www.census.gov/geo/www/tiger/glossary.html A. Census Definitions - . the following is an excellent source of definitions and explanations of geography-related terms

Family Definitions from the Census

1992 Census of Transportation, Communications, and Utilities, Definitions of Industries - Bureau of the census,