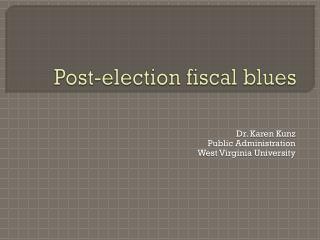 Post Election Sequestration Outlook - . what happens if we go off the fiscal cliff. 13 november 2012. where to begin….

The Post Election Landscape - . where now for our campaigns?. cuts, cuts, cuts. “osborne will have to announce 22%

Post Election Vote Auditing - . fritz scheuren university of chicago. murphy’s corollary. if you did not check it, then