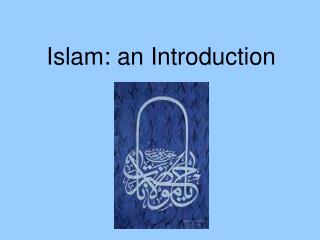 Arabia the Cradle of Islam - . introduction of arabia before the advent of islam. history of islam the arabian peninsula

Islam (Intro Video) - . sol whi. 8. muhammad. born around 570 ce in a town called mecca. considered to be the greatest

Introduction to Islam - . what is islam?. the word islam means: “peaceful submission to the will of god.” muslims

Introduction to Islam in Britain - . desire for assimilation integration acceptance of cultural and ethnic differences

Islam and Restorative Justice: An Introduction - . presented by the center for restorative justice and peacemaking. islam