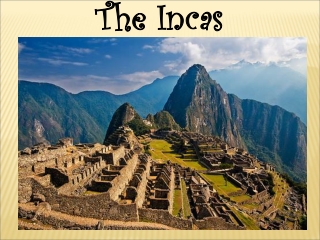 The Incas. The Incas were one of the largest empires in the Americas from 1200’s to the 1500’s. The territory of the Incan Empire stretched for more than ______ miles along the western coast of South America. 2,000. Peru. THE INCAS - . by matias aguilar. the legend of the ayar

The Incas - . 16.3 chapter 16 section 3. geography. located in south america began in the andes mountains capital is

The Incas - . in this lesson, students will be able to define the following terms: andes mountains terrace farming

The Incas - . in this lesson, students will be able to define the following terms: andes mountains terrace farming cuzco

The Incas - . chapter 26. the basics:. the inca empire developed in the andes mountains and lasted from the early