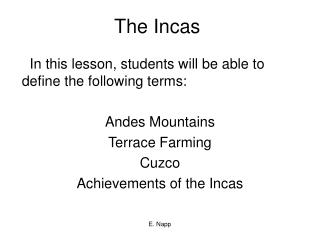 The World of the Incas

The Incas - . chapter 26. the basics:. the inca empire developed in the andes mountains and lasted from the early

Who were the Incas? - . where did they live? andes mountains of south america. there was desert on the coast and

Art of the Incas - . about the inca people . pottery . the aryballos. handled jar whose base is in shape of a cone.

Chapter 12 Section 2 The Incas: People of the Sun! - . during the reign of topa inca , the incan empire grew to over