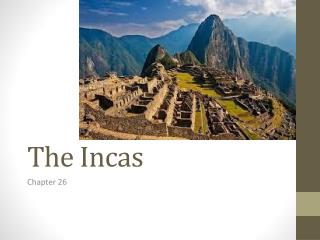 The Incas. Chapter 26. The Basics:. The Inca Empire developed in the Andes Mountains and lasted from the early 1400’s until 1532 The Empire spanned 2500 miles It covered the modern day countries of Peru, Bolivia, Ecuador, Argentina, and Chile THE INCAS - . by matias aguilar. the legend of the ayar

The Incas - . 16.3 chapter 16 section 3. geography. located in south america began in the andes mountains capital is

The Incas - . in this lesson, students will be able to define the following terms: andes mountains terrace farming

The Incas - . in this lesson, students will be able to define the following terms: andes mountains terrace farming cuzco