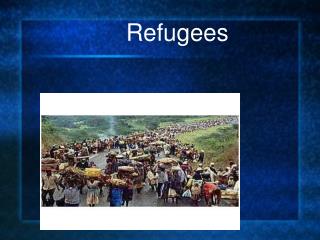 Clearing a migrant camp - Greek police move some of the 8,000 migrants and refugees stranded in a makeshift camp on the

Refugees Land on Greek Island - According to local media, over 200 immigrants have arrived in kos every day in the last

LGBT Refugees and Asylees: Responding to the Needs of a Hidden Population - . heartland alliance for human needs

Setting the Scene - . civil defence is a: voluntary humanitarian organisation. dedicated to assisting the community by

“One thing I know… - . the world has forgotten us.” -amos aguny kur. every day in the sudan. in the region of

From Local Village to Global Village - . developing skills and broadening horizons for refugees from burma in a language,

Foreign-Born in Maryland - . presented to the maryland coalition for refugees and immigrants june 20, 2002. what we know

Motives for European Exploration - . crusades  by-pass intermediaries to get to asia. renaissance  curiosity about

Sorrow, Strength, Forgiveness and Growth - . pastoral counseling with immigrants, refugees, and other survivors.

What is migration? What types of migration exist? Legal, illegal, irregular migrants; refugees; labour migration. - What

Chapter 3: Migration - . the cultural landscape: an introduction to human geography. migration. a type of mobility