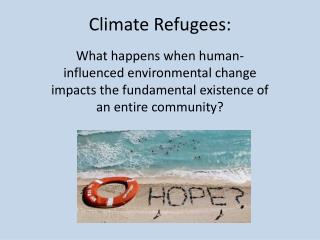 Measuring environment and climate change from a gender perspective Where to start? - . gender statistics work session

THE EFFECT OF ENVIRONMENTAL REFUGEES UPON BIOSPHERIC HEALTH AND INTEGRITY John Cairns, Jr. - The effect of environmental

Sustainability and Climate Change in Asia and the Pacific - . victoria keener, phd east-west center april 15, 2013. most

Refugees , Asylees, And Immigrants Worldwide - . one who flees in search of refuge, as in times of war, political