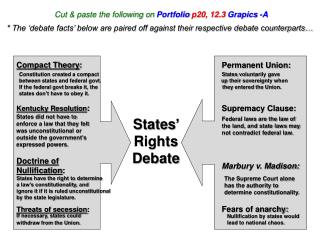 Cut & paste the following on Portfolio p20, 12.3 Grapics -A. * The ‘debate facts’ below are paired off against their respective debate counterparts… . Compact Theory : Kentucky Resolution : Doctrine of Nullification : Threats of secession :. Permanent Union: Supremacy Clause: The sixth Democratic Debate - Highlights from the latest democratic debate in