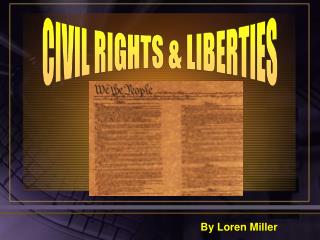 CIVIL RIGHTS & LIBERTIES. By Loren Miller. CIVIL RIGHTS. Bill of Rights Unanimously defeated at the convention Unnecessary as state constitutions protected individual rights So why was it proposed in 1789? What is its purpose? To limit the power of government Civil Rights Movement and Political Developments in the 1960’s - . mr. stikes. ssush19 the student will identify the