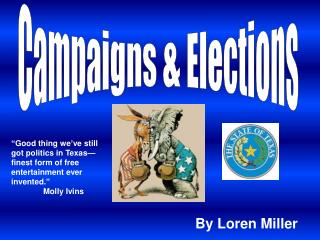 An Overview on the EatSmart Campaigns - . diet and disease. three ncds account for almost 60% of all registered death in

Chapter Ten - . elections and campaigns. chapter objectives . demonstrate the differences between the party-oriented

The Anti - Smoking Team - . the evils of s moking! . smoking – previous campaigns. campaigns against have been used