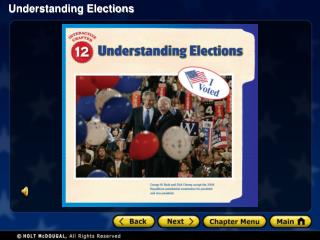 Political Parties: What do they do? - . promote a political agenda to influence government policy and action select

Political Campaigns and the Social Web Media - . how do different media based on the internet play a significant role in

Election Campaigns - . 16 october 2013. what should a campaign do?. inform voters about positions of parties inform

Election Campaigns - . c. 2008. mercer - the student vote - no one cares about you!. conservative campaign ads. harper -

Money and Campaigns - . nature of modern campaigns. most electoral contests are similar in a number of ways. nomination

Congressional Campaigns - . jacobson chapter 4. the goal. the goal of any campaign is: to win the most votes and thus the