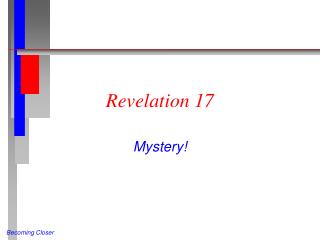 Revelation 17 19 - 2. identifying the harlot. question 1, who is the harlot and why?"question 2, how was the woman

REVELATION Chapter 17 - . the great whore babylon. 1 and there came one of the seven angels which had the seven vials,

Revelation Chapter 17 - . the judgment of religious

Revelation 13:16-17 - It also forced all people, great and small, rich and poor, free and slave, to receive a mark on

Revelation 2:12-17 - . pergamos the seat of satan. the altar of zeus. “and to the angel of the church in pergamos

The Sequence of Revelation 17 - . sequence of revelation

Revelation - . god’s call to humanity. natural revelation- the world. as we approach the scriptures, let us begin with

REVELATION - . + j.m.j.f. my brothers and sisters in christ jesus may his grace and peace be with you always. the purpose

Revelation - Authorship, genre, point of view and rhetoric who is the