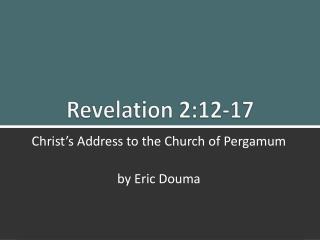 Revelation 2:12-17. Christ’s Address to t he Church of Pergamum b y Eric Douma. Smyrna Review. Church at Smyrna : Commendable: Suffered for Christ Rebuke: none Correction: none The promise: Be faithful until death, and I will give you the crown of life (2:10). Smyrna = “Bitter” PRIVATE REVELATION - . role of private revelation in the life of the church. the teaching of the church distinguishes

Revelation Beyond the Bible? - - newmanlib.ibri.org -. revelation beyond the bible?. robert c. newman. abstracts of

Keys to Understanding Revelation - “the revelation of jesus christ, which god gave him to show his servants - things

The Book of Revelation - “these shall war against the lamb, and the lamb shall overcome them, for he is lord of lords,

Revelation chapter twelve - “the revelation of jesus christ, which god gave him to show his servants - things which

Revelation … What was it all about? - . apocalypse. biblical prophecy is not primarily “what is coming” but “what

Divine Revelation - . god revealed himself in words and deeds slowly to the people of israel. this revelation was

Revelation - . &quot;do not be afraid. i am the first and the last. i am the living one; i was dead, and behold i am

Revelation - . by michael baicker and harley schwing. summary of revelation. chapter 1: john must keep track of

THE NICOLAITANS - Who were they? what did they teach? what was so wrong with them? why did jesus hate their teachings?