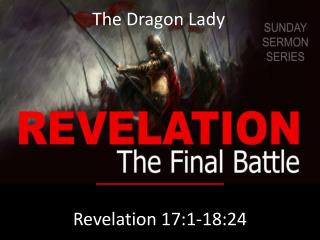 The Dragon Lady. Revelation 17:1-18:24. The Great Harlot /Scarlet Beast. Revelation 17:1. Then one of the seven angels who had the seven bowls came and said to me, “Come, I will show you the judgment of the great prostitute who is seated on many waters,. Romans 3:10.

18- 1 - . housekeeping items. i’m at a bit of a loss at how to proceed. attendance is spotty at best. six or so people

The Fall of Babylon Revelation 18 - . angel lightened in glory. the glory of the lord returns to his temple and people. a

Revelation Chapter 17 - . the judgment of religious

MYSTIC BABYLON, THE GREAT HARLOT - . isaiah 1:21. “see how the faithful city has become a harlot! she once was full of

THE SEVEN PLAGUES OF REVELATION - . the wrath of god. q. 1) what are the seven plagues called? revelation 15:1 “having

REVELATION Chapter 17 - . the great whore babylon. 1 and there came one of the seven angels which had the seven vials,

SEVEN BOWLS OF JUDGMENT - . revelation overview. chapter 1 – john receives his revelation of what will shortly take

Revelation 21:1-2 - . now i saw a new heaven and a new earth, for the first heaven and the first earth had passed away.

Revelation 8-9 - . the sounding of the six trumpets. sounds. have you ever lived in a city, what did you hear? what about