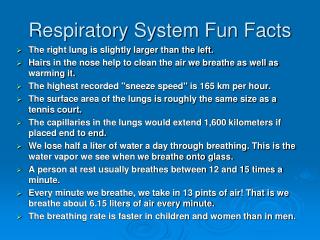 Respiratory System Fun Facts. The right lung is slightly larger than the left. Hairs in the nose help to clean the air we breathe as well as warming it. The highest recorded "sneeze speed" is 165 km per hour. The surface area of the lungs is roughly the same size as a tennis court.