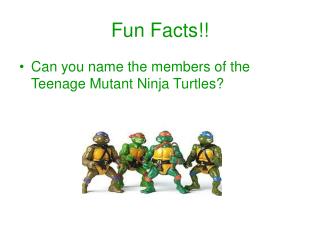 Fun Facts!! Can you name the members of the Teenage Mutant Ninja Turtles? Leonardo in the BLUE

The Teenage Brain - . consequences within the classroom. brain facts. let’s do some myth-busting. myths – true or

Why Should You Care About the Environment? - . wade b. worthen. biology department, furman university, greenville, sc.