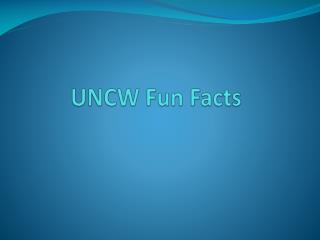 UNCW Fun Facts. When was UNCW founded?. 1947. UNCW was originally founded as Wilmington College in 1947. How many students attend UNCW?. 13,000. How many Bachelor’s degree programs are there?. 52. How many consecutive conference titles has the men’s swimming and diving team won?. 11. Eye Fun Facts - . most people blink every 2-10 seconds.each time you blink, you shut your eyes for 0.3 seconds, which