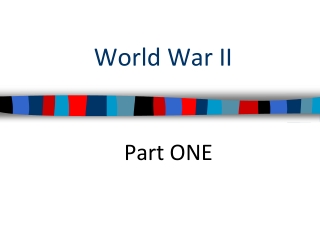 World War II. Part ONE. Essential Questions : What caused World War II? What were the major events during World War II from 1939 to 1942? What happened during the invasion of Nanking? How did the policy of appeasement contribute to the escalation of tension in Europe in the 1930s? World War II - . in what ways did the peace settlement with germany at the end of world war i make a new world war with