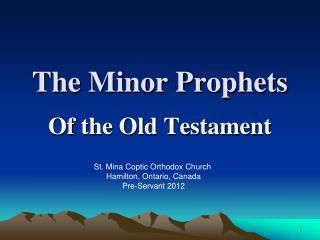 The Minor Prophets - . introduction. probably the least studied section of the bible. “minor” designation is not

The Minor Prophets - . lesson 1 an introduction to the minor prophets. introduction. why bother teaching from the old

Attachment - . time to change seats!. your experience. how does it feel to have to move to another seat? how attached

Interdomain Routing and BGP - . the slides here were created by timothy g. griffin of at&amp;t and presented at a

MIRACLES OF PROPHETS - . group members: komal shakeel,nadia arshad,sajal khan and maayza nadir. what is a

LDS Jeopardy - . welcome to lds jeopardy! be certain your answers in question format. creation. jesus christ is our

The Shoulder Complex - . muscles of the ac joint. chapter 4. movements of the scapula . 1. elevation 2. depression 3.