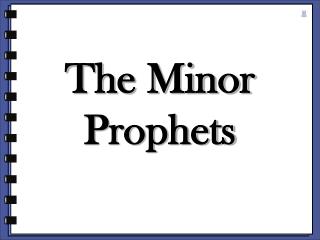 The Minor Prophets. Introduction. Probably the least studied section of the Bible. “Minor” designation is not given based on the importance of the material contained, but rather the shortness of each respective writing. This study will basically be an “overview” of each of the 12 books. Minor Members of the Solar System - . chapter 23, section 4. asteroids. asteroid – small rocky bodies that have been

Welcome To: - . tenderfoot requirement #12 a. demonstrate how to care for someone who is choking. b. show first aid for

Our Brother Judah - Acts 3:21 whom the heaven must receive until the times of the restitution of all things, which god

Major and Minor Prophets - . the pentateuch: genesis – teaches us about the origin of the universe and records