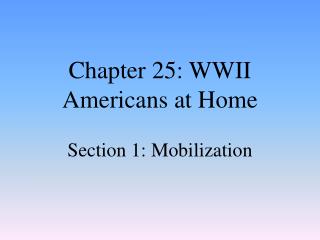 Chapter 25 - . world war ii at home. section one: the shift to wartime production. us gets out of depression due to

America in the 1950s - . society &amp; culture. warm up. which us president pulled-off the biggest upset in

World War II - . a timeline of events. timeline. 1922 – mussolini becomes dictator in italy. he is known as “il