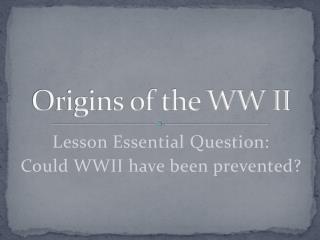 Origins of the WW II. Lesson Essential Question: Could WWII have been prevented?. Remember… One More Lollypop and Then You All Go Home!”. The Great Depression to WWII . The effects of the Depression are felt around the world What happens when economic times are bad? WW II - . war begins. dictators seized control of their nations by force after ww i and during the depression. adolf

WW II - . people. hitler. appointed chancellor of germany. author of mein kampf. seen as the “savior” to the german

Causes of WW II - . radical ideologies – fascism and communism. cause 1:. definition of fascism. fascism : is a

WW II - . ww ii was going on for years before the us became involved. japan made the usa become involved on december 7,

Effects of WW II - . the “cold” war starts…. **what is the cold war?? **how did the shift from wartime to peacetime

Call of duty WW II - Is add on to the famous game call of duty. it is a first-person shooter video game which is to be

The Road to WW II - . beginnings . us isolationism. the mood of the united states following ww i and before ww ii was