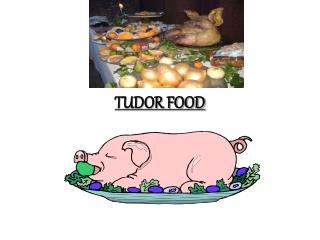 Tudor Food - . jonny farrow. menu for a banquet in honour of king francis i of france given by king henry viii of

TUDOR FOOD - . by anna. tudor food and drink. most people had a very basic diet: bread, cheese, vegetables and fish, with

TUDOR FOOD James Wright Yr5 - . this drawing of these tudor family at their dinning table. there is a parrot on the