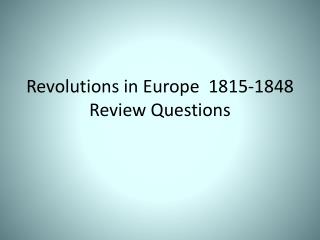 Revolutions in Europe 1815-1848 Review Questions. What were the goals of the Congress of Vienna?. The Congress of Vienna wanted…. A return to the “Old Order” = monarchies A balance of power among nations To prevent future revolutions (in order to do that they would have to limit rights.).

Revolutions - . “q” what is revolution?. revolution is a complete change. this change does not have to be violent,

Unit 3 Part 1: Age of Revolutions - . 7-3.1 explain the causes, key events, and outcomes of the french revolution,

1848 - . the year of revolutions. what happened in 1848. the people across europe (and other places) revolted and