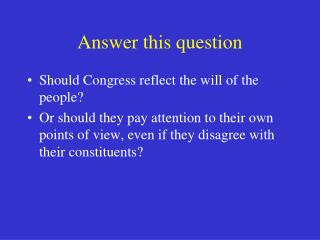 Answer this question. Should Congress reflect the will of the people? Or should they pay attention to their own points of view, even if they disagree with their constituents?. Location in Constitution Article I Term of Congress = 2 years 2 one year Sessions Session = January-December. DNA : Answer this question… - . “since the 1800s, women have not made significant progress in obtaining equality with

How Do I Answer This Question - What is qar?. qar provides a strategy for identifying different types of questions and

Answer this question in your teams: - . would you risk taking part in a revolution against your government despite the

Question Answer - . relationship. 1.right there. right there- the answer is right there in the text. students need to

Question-Answer Relationship - Qar. question-answer relationship. right there. think and search. author and you. on your

Question-Answer-Relationship - . purpose: to learn better self questioning strategies. 2 sources of information. in the

Question and Answer - . 1) a weighted monte-carlo ray trace of particles exiting the target/magnet assembly for all

Question Answer Relationships - . qar. the four types of questions. right there search and locate author and you on my

QUESTION to answer - . you are worried about a possible disease form central or se asia affecting 600 people decide

Question Answer Relationships - . qar. the four types of questions. right there search and locate author and me on my

Question-Answer Relationships - . purpose. the purpose of teaching the qar strategy is to show students that questions