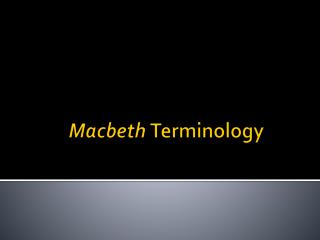 Macbeth Terminology . Terminology. As we read various scenes and sections of the play, you will need to look out for examples of the following terms.

‘Something wicked this way comes’ - . macbeth and the performance of ‘evil’. macbeth , dir. rupert goold, 2010.

Macbeth - . day 10. first 5. reflect on the reading we’ve done this week. which character do you most relate to? lady

Macbeth Quote - By: dillon trent. macbeth quote. macbeth: into the air; and what seemed corporal, melted, as breath into