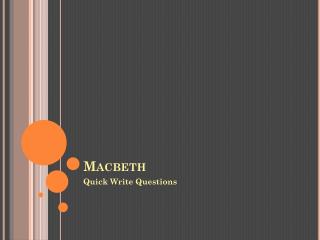 Macbeth. Quick Write Questions. MACBETH TUESDAY, OCTOBER 9, 2012. Why do some people seek power at all costs? Explain the cause and effect that this may have on an individual and others around them. MACBETH WEDNESDAY, OCTOBER 10, 2012.