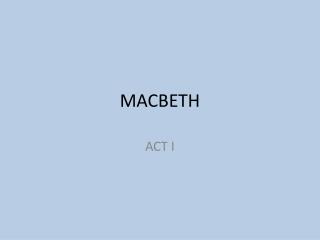 MACBETH. ACT I. THE SETTING. SCOTLAND 1100 A.D. SCOTLAND IS DIVIDED INTO SECTIONS OF LAND. Characters. Duncan is the king EACH SECTION “OWNED” BY A THANE Map of Macbeth's Scotland. Characters…cont. Characters are called “Thane of Glamis” or “Glamis” as well as their names (Macbeth)