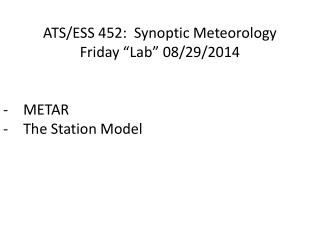 ATS/ESS 452: Synoptic Meteorology Friday “Lab” 08/29/2014 METAR The Station Model. What is a METAR?. Acronym for METeorological Aviation Report Generated at least once an hour (usually right prior to the end) or when a significant change in weather occurs