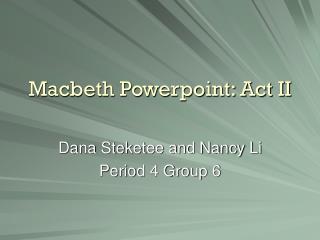 Macbeth : Act II- Beware of excessive ambition! - . review what we know about macbeth in act i. new term: blank verse

Act II - . center activities. comprehension questions. scene 1: why does banquo prefer not to sleep? what offer does

Macbeth - . act iii. act iii scene: i. the story begins in the palace at forres. where banquo is thinking nervously about

Macbeth - By william shakespeare. macbeth. by the pricking of my thumbs, something wicked this way comes. iv,i,44-45.

MACBETH - . act ii. act ii, scene i. banquo and his son fleance enter a court yard and remark on how dark it is. here is

Act 2, Scene 2 Macbeth - . lesson aims to summarise the key events in this scene. to understand the meaning of key quotes