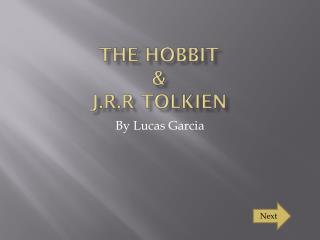 The Hobbit & J.R.R Tolkien. By Lucas Garcia. Next. Teachers. Students. How to Teach this Powerpoint. - For teachers looking to incorporate this powerpoint into a lesson plan here are a few things to know Make sure you use this powerpoint parallel or after you read the book.

Sir Gawain and the Green Knight - . major themes: the nature of chivalry the letter of the law theme of fidelity: serious

Common Errors! - . how to write the title of a novel silly errors! pronoun confusion faulty parallelism formal vs.

The Lion, the Witch and the Wardrobe - . by c.s. lewis. c.s. lewis biography. born in 1898 in belfast, northern ireland

Vocabulary - . from the hobbit. vocabulary: the hobbit i. blundering (2) fabulous (2 ) discreetly (3) depredations (9)