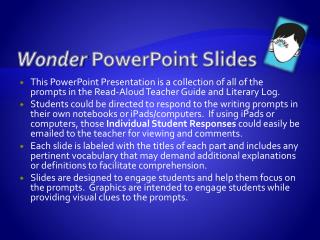 Wonder PowerPoint Slides. This PowerPoint Presentation is a collection of all of the prompts in the Read-Aloud Teacher Guide and Literary Log. motivation (modern) powerpoint presentation content: 144 sli - The power and ability to succeed is in all of us, all it

coaching (modern) powerpoint presentation content: 129 slide - Being capable of coaching is an important skill that can

I’m Gonna Sing-Sing-Sing - Due to the nature of different versions of powerpoint you may have used to open this, some