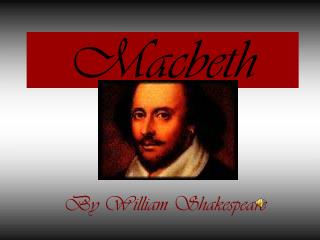 Macbeth! (Woo hooo !!!) - . take notes and complete the quiz at the end to the best of your ability. turn this stuff in

Idealism - . macbeth , act i, scene i. is this a dagger which i see before me, the handle toward my hand? come , let me

A PowerPoint Summary - . act i, scene 1. three witches gather and say that they’ll meet with macbeth before sunset and

Macbeth - . act iv, scenes i-iii. major characters. macbeth. the lead character in the play. he is a very brave warrior.

ESSAY 1 - . by the pricking of my thumbs, something wicked this way comes. check the as. check the explanatory notes.

Macbeth Quotes - . feraco search for human potential 20 january 2009. quotes!. you will be asked to translate

Macbeth - Context - . elizabethan world view and the great chain of being. during elizabethan times, people believed that