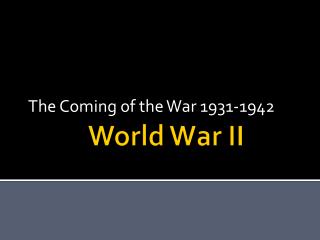 The Coming of the War 1931-1942. World War II. Dictators at War. Democracy. totalitarianism. Totalitarian governments is a theory of government in which a single party or leader controls the economic, social, and cultural lives of its people. The World Bank - . ibrd &amp; ida : working for a world free of poverty presented by neetha abraham and christina

The World Before World War II - . motivation: who are the people in the picture below, and what country did they

WAR! Causes of the First World War - (note: “world war i” is an american term. the correct terminology in canada [and

World War II - . the war that changed the world. the road to world war ii. treaty of versailles ended world war i it was

What in the World is a Worldview? - . definition. the germans coined the term using weltanschauung (world outlook) in the

World Climates - . objective: to examine and reflect on how different climate patterns of the world influence regions.