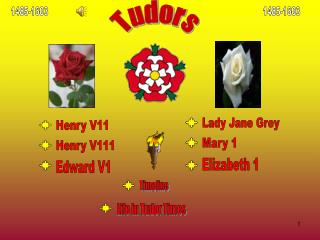 Tudors - Henry 7. henry tudor defeated king richard 3 at the battle of bosworth in 1485 and became the king.this called

tudors - . who are they. the tudors are people that are kings and queens. example: king henry viii and edward i. the

TUDORS - . the war of the roses page 1 henry viii page 2 henry viii’s wives page 3 who were the tudors? page

The Tudors - Elizabeth i. henry viii. anne boleyn. william shakespeare. why were they important?. who were they?. the

The Tudors - . we are going to learn more about the food eaten in tudor times. tudor kitchen. kitchen now. the poor.

The Tudors - . the hundred years war. english house of plantagenet vs. french house of valois 1337-1453 series of battles

The Tudors - . learning objective: to learn about tudor exploration. the tudor navy. when henry viii came to power,

The Tudors - Section one:to investigate: what was the war of the rosesclick here to see mrs weekes facts how did henry

The Tudors - . we are going to learn more about the food eaten in tudor times. the poor. there were a great many poor

The Tudors - . tudor times tudor towns life for the rich life for the poor food and drink growing up and education fun

The Tudors - . a year 4 autumn term module. section one: to investigate: what was the war of the roses click here to see

The Tudors - . www.historytl.com. complete the single bubble on the tudors and henry viii. the tudors. the tudors

THE TUDORS - . cures. blood letting. if you have a disease your limbs get cut off to let the bad blood out!. leeches. in

Tudors Revision - . learning outcome: all will: identify the key terms of the tudor period most will: describe some of