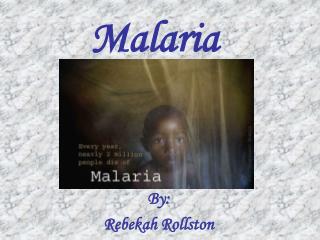 Malaria. By: Rebekah Rollston. Quick Facts. Malaria is spread by the bite of the Anopheles mosquito. 350 to 500 million cases of malaria occur annually. More than one million people die annually from malaria. Malaria - . malaria is a vector borne parasitic disease caused by the genus plasmodium , affecting over 100 countries of