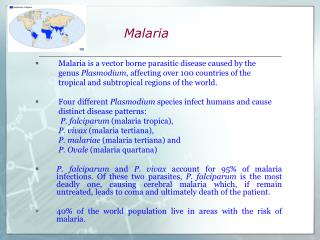 Malaria. Malaria is a vector borne parasitic disease caused by the genus Plasmodium , affecting over 100 countries of the tropical and subtropical regions of the world. Four different Plasmodium species infect humans and cause

Malaria - . by: rebekah rollston. quick facts. malaria is spread by the bite of the anopheles mosquito. 350 to 500