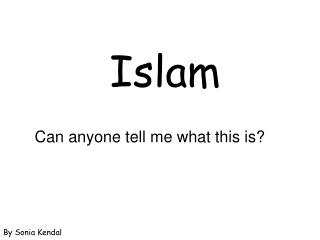 Islam Can anyone tell me what this is? By Sonia Kendal Today you are going to learn … About the Islam faith The place of worship for the Islam religion. Islam is the religion of people called Muslims.

What is islam ? - . islam is a legal, political, economic, social, and military ideology wrapped in a thin skin of