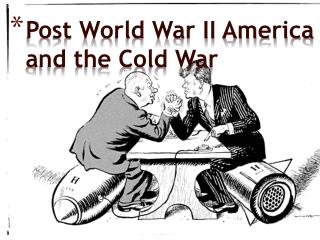 Post WWII/Cold War Goals for US - . promote open markets for us goods to prevent another depression promote democracy

Cold War and Post World War II Political and Economic Issues - . what was the experience of africans in british colonies

Chapter 28 Post WWII and the Cold War - . cold war: an era of competition and confrontation between the u.s. and the