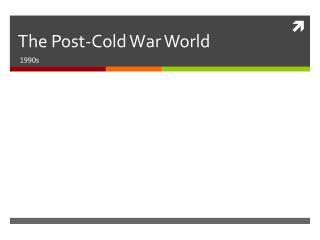 The Post-Cold War World. 1990s. The end of the Cold War leads to…. the expansion of democracy across the globe. Why? an outbreak of ethnic conflict in the former USSR. Why? the U.S. as the only superpower ( hegemon ). Expansion of Democracy. New democracies: Spain Portugal Greece The Cold and Post War - . the beginning of the cold war differences refusal to giving up a buffer zone 1946 greek civil

Cold War And the World - . third world. countries in asia, africa and latin america that had struggling economies. today

Cold War Around the World - . after wwii nations were grouped politically into three “worlds.” 1. first world –

Airpower Through The Post Cold War - . overview. background to the conflict iraqi threats the plan of attack concept of