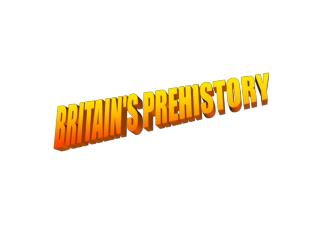 BRITAIN'S PREHISTORY. THE EARLIEST TIMES. Britain has not always been an island. It became an island after the end of the last ice age, about 8000 years ago. THE EARLIEST PEOPLE. Prehistory - . what is prehistory?. the period before recorded history. items from that time period are called

Prehistory - . what is “history”? “ historia ” from the greek meaning: inquiry by examination of evidence history

Prehistory - . ancient chapter 1, section 2. the stone age: from hunting and gathering to farming. the first use of stone

Prehistory - . the oldest leaving things on earth …. long ago. dinosaurs existed long ago. what does it

PREHISTORY - . prehistory is the period when human beings existed on earth but had not yet invented writing and therefore

PREHISTORY - . period in which our ancestors existed on earth but had not yet invented writing our knowledge of them

Prehistory - . 1. what do we call prehistory ?. from the emergence of our ancestors , 5 million years ago , to the

Prehistory - . what are we doing? we are studying the first developments of humankind why are we doing it? it is

Prehistory - . the road toward civilization…. warm up. describe two things you learned about the middle east from last