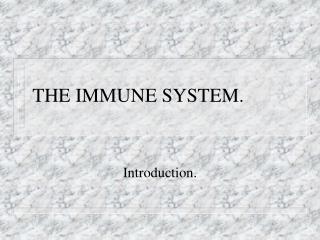 THE IMMUNE SYSTEM. Introduction. INTRODUCTION. Is a bodywide network of cells and organs that has evolved to defend the body against attacks by “ foreign “ invaders. Its success relies on incredibly elaborate and dynamic communications and interactions among millions of cells. The Immune System - . alisa, pratik and sarita. define the term pathogen . - a bacterium, virus, or other microorganism

The Immune System - . a simple introduction to the variety of mechanisms used by our bodies to combat disease . by margi

The Immune System - . campbell and reece chapter 43. innate immunity. nonspecific defense that is active immediately upon