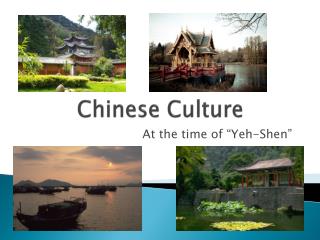 Chinese Culture. At the time of “ Yeh-Shen ”. Chinese culture. “It is time for this heroine’s Asian identity to be recognized and the evocative story motifs understood in their Asian contexts” (Beauchamp 1) What was the culture of Yeh-Shen , also known as Yexian ?. Dynasties!. Chinese Culture - . as you view the slide show, fill in facts on the worksheet. social organization – traditional.

Chinese Culture - . i. women. a. women in china lived according to confucian rules 1. they are not equal to men 2. they

Chinese Culture Quiz - . directions. be sure to restate the question as part of your answer. since some questions have