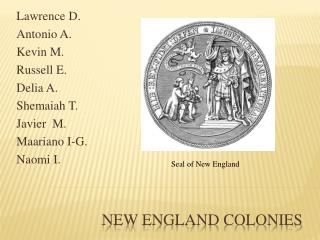 Lawrence D. Antonio A. Kevin M. Russell E. Delia A. Shemaiah T. Javier M. Maariano I-G. Naomi I. Seal of New England. NEW ENGLAND COLONIES. “If any man or woman be a Witch, that is, hath consulteth with a familiar spirit, they shall be put to death.”

New England Colonies - . 42-50 in textbook. plymouth and the pilgrims. puritans flee great britain to america by way of

1. In the New England colonies, the growth of democracy was encouraged by - 2. which principle of representative

The New England Colonies - . chapter 3 section 2. colonies reasons they were settled. help from the native americans.