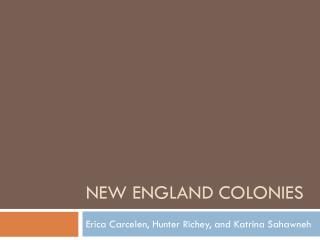 New England Colonies. Erica Carcelen, Hunter Richey, and Katrina Sahawneh. Religion. Puritan Believed in Calvinism Witch Trials Conducted many witch trials, especially Salem, Massachusetts Believed witches had joined with the devil and were to do what the devil asked

COLONIAL REGIONS - . jamestown. was colonized primarily for economic reasons. after initial failures as a corporate

England and Constitutionalism - . james vi (king of scotland) becomes james i of england in 1603 (upon elizabeth i death)

7 th Grade Geography and History The Colonies Learning Targets: - To understand how the colonies developed and prospered

13 Colonies and the Seeds of Revolution - . warm up?. what could be some reasons that would cause you to move to another

Opening: - . in class you will need a writing utensil, a piece of paper, and a highlighter if you choose to highlight. .

Test Review - . 1. in “speech in the virginia convention,” patrick henry says, surprisingly, that he must take a