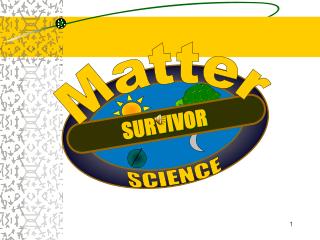 Matter. SURVIVOR. SCIENCE. Describe that matter is neither created nor destroyed even though it may undergo change. A. 250 grams, because it is still the same amount of water B. 375 grams, because when water, sugar, and flavoring are mixed the flavoring doesn’t weigh anything SURVIVOR - DVM - . a day in the life of a new grad. cartoon by: m. pye. survivor - dvm. picking a practice managing your

Topic Here Survivor - . can your team out-name of topic your opponents to win the title of topic survivor?. the six

Pre-Algebra Survivor - . can your team out-math your opponents to win the title of pre-algebra survivor?. the six tribes.

Cockroaches The Ultimate Survivor - . nuisance. def : something that is annoying or bothersome text: “cockroaches are